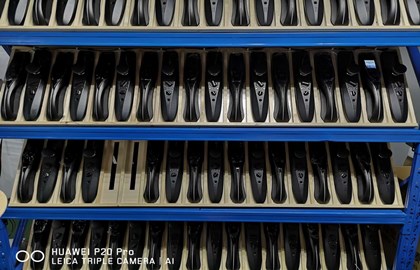 A motion detector is an electrical device that utilizes a sensor to detect nearby motion. Such a device is often integrated as a component of a system that automatically performs a task or alerts a user of motion in an area. They form a vital component of security, automated lighting control, home control, energy efficiency, and other useful systems

An active electronic motion detector contains an optical, microwave, or acoustic sensor, as well as a transmitter. However, a passive contains only a sensor and only senses a signature from the moving object via emission or reflection. Changes in the optical, microwave or acoustic field in the device's proximity are interpreted by the electronics based on one of several technologies. Most low-cost motion detectors can detect motion at distances of about 15 feet (4.6 m). Specialized systems are more expensive but have either increased sensitivity or much longer ranges. Tomographic motion detection systems can cover much larger areas because the radio waves it senses are at frequencies which penetrate most walls and obstructions, and are detected in multiple locations.

Motion detectors have found wide use in commercial applications. One common application is activating automatic door openers in businesses and public buildings. Motion sensors are also widely used in lieu of a true occupancy sensor in activating street lights or indoor lights in walkways, such as lobbies and staircases. In such smart lighting systems, energy is conserved by only powering the lights for the duration of a timer, after which the person has presumably left the area. A motion detector may be among the sensors of a burglar alarm that is used to alert the home owner or security service when it detects the motion of a possible intruder. Such a detector may also trigger a security camera to record the possible intrusion.

Return
Follow CLOUDEW And become part of our cloudew community